THE RONNIE PENQUE BAND
Since 2005 Ronnie Penque has been the bassist for the world famous New Riders of the Purple Sage (started by Jerry Garcia in 1969). The Ronnie Penque Band is Ronnie's side project that has been rocking the Tri-state area for years. RPB is made up of old friends, James Saluzzi and Clay Cassell on lead guitar and drums. Ronnie is lead singer and bassist. The band is rounded out by Jeff Pearlman on keys and the new addition of Wayne Wilson on Pedal steel guitar. Some nights the line up includes Ron’s Brother Chris Penque on rhythm guitar. Ron, Chris, James and Clay are former members of the famous Grateful Dead cover band Ripple.  Ronnie Penque Band plays the best of classic New Riders of the Purple Sage, along with covers of Jerry Garcia band, The Grateful Dead, Bob Dylan, rocking originals & others.
Ronnie Penque     Bass Guitar and Vocals
James Saluzzi    Lead Guitar and Vocals
Clay Cassell     Drums & Vocals
Jeff Pearlman      Keys and Vocals
Chris Penque         Rhythm Guitar
Wayne Wilson      Pedal Steel

Ripple announces reunion concert
The New Jersey based Grateful Dead tribute band Ripple will reunite on Friday, February 3rd 2012 for a “one night only” concert at Mexicali Live in Teaneck New Jersey. Ripple has been know for decades as one of the premier Grateful Dead cover bands in the New York tri-state area. Since 1978 Ripple has brought the live excitement of an authentic Grateful Dead show to its fans like no other. In 2003 Ripple disbanded and called it quits after 25 years.

In November of 2011 Ripple reunited for the first time in eight years for a private party in Tappan New York. 200 plus people packed into the tiny venue to witness this show. Many fans were not able to get inside and see the show. Fans are looking forward to the reunion of Ripple at Mexicali Live on February 3, 2012. 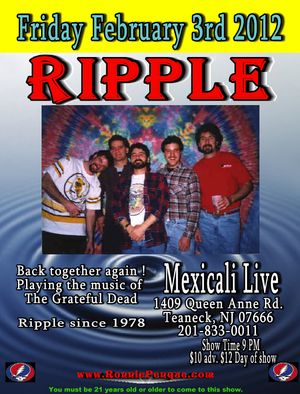 In 2005 Ronnie Penque joined the world famous New Riders of the Purple Sage, a San Francisco based band started by Jerry Garcia of the Dead in 1969. Since then Ronnie has been touring the country with The New Riders who in 2009 released their first studio album in 20 years, “Where I come From” on Woodstock Records. In 2010 Ronnie released his first solo record “Only Road Home” on Bayland Records. Clay Cassell and Wigjam still play in the NY/NJ area and recently played a show with Phil Lesh and Bobby Weir of the Dead. Pete Nardone is involved in many recording projects while Chris Penque plays in The Ronnie Penque Band with his brother.